Ricky (The Hitman) Hatton pays us a visit and takes on cycling challenge. 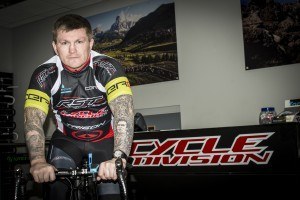 Ricky trying the bike and kit out.

At Cycledivsion we see many famous names from the world of motor racing, being under the umbrella of motodirect and part of the same company as RST motorcycle clothing rarely a day goes by when our offices, corridors and showrooms aren’t frequented by a motorcycle legend, a four time boxing world champion however is an unusual sight in our building.

Team member Dan (fancy pants) Storey was contacted by Ricky Hatton’s team asking if we could help them out with an audacious charity challenge. The infamous La Mont Blanc cycle, an epic 140km journey taking in some of Europe’s most challenging climbs and descents.

For most experienced cyclists this would be an extremely tough day in the chair and Ricky is taking the challenge seriously, he’s embarking on a grueling training regime to shed some extra muscle mass in order to complete the course as quickly and easily as possible.

Ricky popped in with his team to get fitted up properly for his first serious road bike the Trigon TR426 with 11 speed Shimano Ultegra gearing, this machine with its full carbon frame set and compact drive train should help Ricky in the thin air and mid-summer heat of the French Alps.

Ricky is taking on this challenge to raise money for the Manchester-based charity Barnabus.

Founded 23 years ago, Barnabus supports the homeless through its outreach, drop-in and collaborative projects.

The charity is able to help between 500 and 600 vulnerable people each week, but due to a sharp rise in demand, it now needs to raise £150,000 in order to extend its premises and improve its medical facilities.

Ricky has already commenced training, as all cyclists know January is never the easiest month to get the miles in, it takes real dedication to get out in the cold and rain,

Ricky needs to be applauded for his determination, he chooses to train before most are out of bed on quiet back roads like a real cyclist.

If you want to help support Ricky in raising money for a cause that he feels very strongly about follow the link http://www.justgiving.com/ricky-Hatton-MBE . He’ll be joined on the journey by Hatton Promotions head of boxing Richard Poxon and unbeaten Sheffield prospects Adam Etches and Scott Jenkins, who are all raising funds for the teenage unit at Weston Park Cancer Hospital.